Miles Bridges, incoming Michigan State freshman out of Flint, Michigan is as of right now, a fringe first round prospect. Ranked the 8th best recruit in the country by ESPN, Bridges chose MSU over Indiana and Kentucky and became Tom Izzo’s highest rated recruit ever. With a stellar recruiting class including Bridges, Joshua Langford, Cassius Winston and Nick Ward, the Spartans look like a potential final four team again this year, even after losing the best all around player in college basketball last year, Denzel Valentine, and the team’s motor, Matt Costello. This year, Bridges will show up to be the star of Tom Izzo’s team, and has potential as a top 5 pick in the 2017 NBA Draft.

Bridges has all the athleticism a GM would want in a forward. He became a youtube sensation his junior and senior year with his Vince Carter-esque dunks all over defenders. During preseason workouts Bridges had a 44 inch vertical, showing that he is super athletic and would fit in as a modern small forward right away in the NBA. Throughout this season, it is no doubt that there will be many sportscenter top ten highlights of Bridges catching lobs and dunking over people.

Offensively, Bridges has potential as a superior scorer. In his first exhibition game for the spartans, Bridges scored 33 points on only 14 shots. While most of his scoring in high school came through his athleticism, his shooting has vastly improved. Bridges has put in a lot of his time working on his shooting mechanics trying to dispel the notion that he can’t shoot – he shot under thirty percent from three in high school. As a result, Bridges appears to have improved tremendously as a shooter, going 7-9 from beyond the arc in his first two exhibition games. A small sample size yes, but indications are that Bridges has become a much better shooter and has potential NBA range. Bridges also will be fantastic in transition. He is strong enough to bully his way to the rim and he finishes well at the rim with both hands. Bridges is not yet developed enough to create his own shot of the dribble super effectively other than by going to the rim, but I think in due time, Bridges’ ball handling will improve and he has flashed potential of the ability to pull up and shoot over defenders. In addition, Bridges is a decent passer who can set up teammates.

Defensively is where scouts are nervous about Bridges. He is seen as undersized with average length. However, I think Bridges is strong enough and quick enough to guard either the three or the four. Since it is foreseeable that Bridges would have trouble when guarding big NBA fours like Anthony Davis and Kristaps Porzingis, I see Bridges as a three that can also play the stretch four in a smaller lineup. Bridges’ 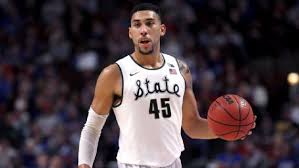 Overall, Miles Bridges is an extremely athletic forward who can defend and who has great offensive potential. Concerns about his shot will he proven wrong this year, and he will prove to be strong enough to play the four and quick enough to play the three this year. He will display great potential on offense and will be one of MSU’s top scorers. A similar player comparison for Miles Bridges is Justise Winslow, who was also seen as an undersized four who can play the three. Bridges will most definitely rise up draft boards quickly, and his ceiling could be a top 5 pick in an NBA draft. Expect Izzo to develop him well throughout the year in all aspects of his game. Lastly, another thing to point out is that in the summer of 2015, after Bridges had just committed to MSU and had just finished his junior year of high school, Travis Trice, leader of MSU’s 2015 Final Four squad, called Bridges better than anyone on the 2015- 2016 MSU roster, which included national player of the year Denzel Valentine and NBA players Bryn Forbes, and Deyonta Davis.

This is a text widget, which allows you to add text or HTML to your sidebar. You can use them to display text, links, images, HTML, or a combination of these. Edit them in the Widget section of the Customizer.
Loading Comments...
Comment
×
%d bloggers like this: