Coming into the 2016-2017 season, we expected the Patriots to be good. Many thought that when Brady returned from his four game suspension, he would pick up a 2-2 team, forcing him to lead them to a great record, and hopefully a first round bye in the playoffs. However, in Brady’s absence, the Patriots not only held their own against their opponents, but proved to be one of the top teams in the NFL behind their backup quarterback Jimmy Garoppolo and their seemingly ageless truckforce in LeGarrette Blount. They finished the four games 3-1, giving Brady more than he needed to make the Patriots the number one team in the AFC, and arguably the league, at the midway point of the season.

Last year the Dolphins finished 6-10, and last in the AFC East. This will most likely not happen again, being that the Jets are in their division. Miami has had some tough games, but two of their losses came to big contenders in the Patriots and the Seahawks, and they lost both games by a touchdown or less. They have won some tough games this year, especially their dominating victory over Pittsburgh. The reason for their recent success could be attributed to their breakout rusher – Jay Ajayi – who had consecutive 200 yard rushing games. A workhorse back is forming in South Beach, and a sign of hope for the future of the team. The Dolphins have definitely improved since last year, and standing at .500 halfway through the season is impressive enough to earn them a B.

The Bills have had some monster wins this season, proving that they are gunning towards being Wild Card contenders this year. Early wins against the Cardinals and Patriots set the tone for what many thought to be a big season. However, a tougher schedule gave way to losses to the Patriots and Seahawks, effectively dropping them to third in the AFC East. On the contrary, they play one team above .500 for the rest of the season, perhaps a sign for things heading uphill from this point on. Overall, they have a great defense, an explosive rusher in LeSean McCoy, and an emerging quarterback in Tyrod Taylor who has the potential to do some real damage in the league. I expect them to make a strong playoff push, and at the very least finish the season having improved from 2015.

Halfway through the season, the Jets have already matched their loss total for all of last year. Last season’s 10-6 record without a playoff berth crushed fans, but provided hope for this year; many of whom expected another big year from veteran quarterback Ryan Fitzpatrick and his top targets Eric Decker and Brandon Marshall. Additionally, they added proven star running back Matt Forte to the roster, but these expectations couldn’t have been more off, as the Jets have been absolutely awful this year. Problems in the secondary and the obvious lack of quarterback play this year have set the jets spiraling downward for another disappointing season.

The Raiders are among the biggest surprises in the NFL this season. They are playing phenomenally, and are in the lead of the best division in the league, record-wise. Coming from a disappointing 7-9 season in 2015, the team really turned things around this year on both sides of the ball. Defensively, they are consistently performing, led by star linebacker Khalil Mack Offensively, Derek Carr is turning into a definite top ten quarterback, proving that he can win games in the clutch, time after time. The Raiders have blown everyone’s expectations, and they truly deserve the A+ grade.

The Chiefs as of late have been a solid team all around, with not much of an excitement factor. Last year, they finished 11-5, and look to be on track to have a similar finish this year. Expect them to go to the playoffs in a wild card spot, but winning the division is a bit far-fetch. Don’t be fooled by this record as it gets much harder the second half of the season.

The Broncos’ 6-3 record can be deceiving. Denver has only beaten one team with an above .500 record, the Texans, who aren’t exactly the league’s most imposing team. Don’t get me wrong, Denver’s defense is still one of the best in the league, with stars in DeMarcus Ware and Aqib Talib to name a few, and their offense has it’s moments. But when it comes down to it, the Broncos have yet to prove themselves as the reigning champs this year, and until they do, they get a grade of C.

The Chargers started off the season looking like the best team that could have been. Coming off the worst season in a decade at 4-12, San Diego was looking to turn things around. However, misfortune struck, and after five weeks, they had managed to blow 4 fourth quarter leads, fumble away two games, and botch a game-tying field goal. Adding insult to injury, the Chargers lost their top two receivers, Keenan Allen and Stevie Johnson, their reliable 3rd down threat Danny Woodhead, and defensive stars Jason Verrett and Manti Te’o, all to season ending injuries. All of this left fans hopeless. However, since this horrid start, the Chargers have gone 3-1, beating two of the top teams in the league in the Broncos and Falcons, and coming just three yards away from beating the Broncos again. Adding on to this, running back Melvin Gordon has burst onto the scene, becoming one of the league’s premier rushers in only his second season.  Standing at 4-5 would look good in any other division in the AFC, but unfortunately for the Chargers, they are in a division with three teams that have 6 or more wins. A playoff push could be on the table, but it seems unlikely that they overtake any of the other teams in their division to get the second wild card spot. Nevertheless, their turnaround from atrocious results has earned them a solid B-. 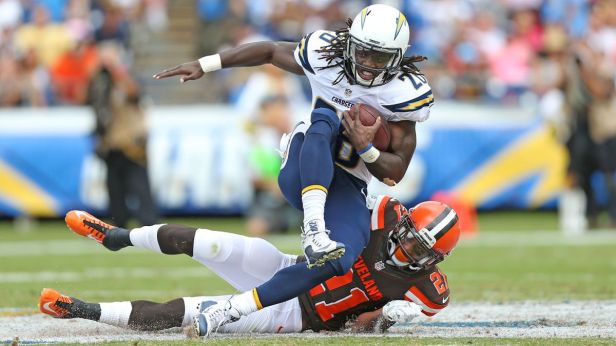 The Ravens came off of a terrible 2015 campaign, going 5-11. At the beginning of this season, they were off and running to a quick 3-0 start, but then lost 4 straight. However, they bounced back from this losing streak with a big win against the Steelers, and look to be somewhat back to their previous form. They still stand at first in their weak division, and their improved play from 2015 earns them a B.

The Steelers came into the season with pretty high expectations, behind their big play offense led by running back Le’Veon Bell, receiver Antonio Brown, and of course, Big Ben Roethlisberger. Bell was out for the first three games, but backup DeAngelo Williams performed very well, helping the Steelers to a 3-1 start. However, Big Ben got injured soon after, and after a few tough losses, the Steelers are sitting at 4-4, and 2nd place in their division. Their schedule should be pretty easy moving forward, but with all the talent they have, they should be doing better than they are currently.

The Bengals have been one of the biggest shocks all season, in a completely negative way. They have made the playoffs as one of the top teams in the AFC in the past 4 years, but something just seems to have gone wrong in 2016. They are underperforming, and can’t seem to win games, even tying the Redskins last week. We’ll see if they can turn this season around and make a division winning run, which can’t be too hard, being as the top team is only half a game ahead of them. However, until they win their division with flying colors, they sit at a depressing D grade.

The Browns did not have many expectations coming into the 2016 season, and they have lived up to that lack of expectation. Losing star cornerback Joe Haden for the season, and having Josh Gordon not come back after his suspension may have contributed to the awful start, but it goes much deeper than that. The Browns offense can’t score points, and the defense can’t prevent points from being scored on them. This combination usually leads to pretty bad teams, and it would be an understatement to say that the Browns are only pretty bad.

Last year, the Texans went 9-7, winning their division. Big name receiver DeAndre Hopkins emerged as a premier threat down the field, and defensive stud JJ Watt rendered offensive lines completely miserable. However, Watt was ruled out for the season early on in 2016, which many considered a huge blow to the Texans defensive prowess. Nevertheless, the defense is still playing well, with some occasional help from the offense. Despite the holes in the roster, the Texans are playing well, and sitting atop their division earns them a B+.

The Colts have been solid the past few years, led by star quarterback Andrew Luck. In 2016, they added bullish Frank Gore to the backfield, bringing in some power to make defenses respect the run, opening the door for Luck to have a field day. However, the team struggled at the start of the season, going 1-3, with their only win practically handed to them by the Chargers. Since then, they have had some decent games, especially a very clutch win last week at Lambeau Field against the Packers. The season is looking better, and if the offense starts to click, the Colts could be a threat.

The Titans came off of a pathetic 3-13 season, filled with mistakes and embarrassing performances. They did some work in the offseason, adding running back DeMarco Murray to the roster, providing the star running back the offense needed to start to open up. Also, in his second season, quarterback Marcus Mariota is starting to be the dangerous dual threat many expected when he entered the league. The Titans are a team on the rise, and their performance this season versus that of last is a true testament to that, earning them a solid A-.

The Jaguars have been pretty much the laughingstock of the NFL for as long as many fans can remember. However, coming into this season, some predicted a decent season, due to the offensive prowess presented by quarterback Blake Bortles, and his two favorite Allens, Hurns and Robinson, catching passes downfield. The addition of running back Chris Ivory looked to be another offensive booster. However, as usual, the Jaguars have failed to impress anyone this year, and sit at a lowly C-.

This is a text widget, which allows you to add text or HTML to your sidebar. You can use them to display text, links, images, HTML, or a combination of these. Edit them in the Widget section of the Customizer.
Loading Comments...
Comment
×
%d bloggers like this: